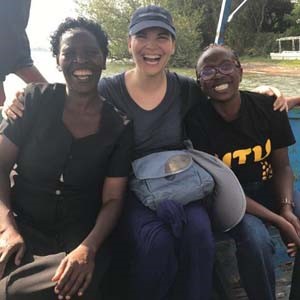 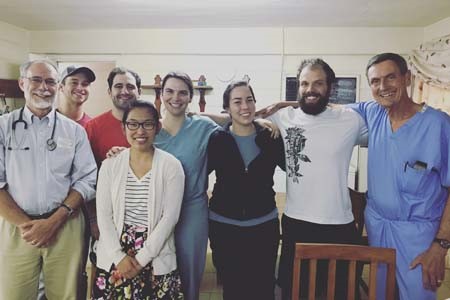 Chelsea Reighard, Southwestern Medical Clinic Foundation scholarship awardee and University of Michigan medical student, served for a month at Tenwek Hospital in Kenya in 2017. Here she shares her experience providing care and helping restore eyesight to the people she served.

My time at Tenwek Hospital in Bomet, Kenya was a whirlwind of learning and serving. The sheer number of patients seen each day in the ophthalmology clinic and operating room was mind-boggling.

During the first three weeks, I worked with a team of three American missionary ophthalmologists, three clinical officers with a specialty in ophthalmology, a team of specialized nurses, and a rotating group of nurses. On “lighter” days, I saw patients who were dealing with allergies, infections, and trauma. I assisted in many of the surgeries and also learned and performed some smaller procedures under supervision.

It’s easy to be sad in a place like Tenwek, to ask God why there is so much pain and suffering. However, Jesus is there and the Holy Spirit is moving. Perhaps the most beautiful part of life and ministry was the constant reliance on God through prayer. Many of the patients have actually come to know the Lord because of the care they received.

During my final week in Kenya, I traveled with the Tenwek medical and eye teams to a remote island in Lake Victoria called Mfangano Island. Mfangano Island has a population of about 20,000 people and is plagued by malnutrition, malaria, and HIV/AIDS. During the HIV/AIDS epidemic, the island was severely affected and many children became orphans. There are no physicians on the island, just nurses and an occasional clinical officer.

Tenwek’s medical staff comes once every couple of years with physicians, residents, and interns to provide medical, dental, and eye care. To testify to the spiritual impact this team has made, there used to be a mosque on the island. When the Tenwek team cared for and ministered to the dying mother of the mosque's leader, he was so moved that he renounced Islam, became a Christian, and closed the mosque. Our first full day there was a Sunday, and we spent the morning in a five hour-long church service, praising the LORD through singing and dancing alongside more than 700 school children.

While we were there, we stayed in cabins and were constantly contending with the clouds of lake flies, which are considered a blessing on the island because they can be smashed into protein powder and used to make fly pancakes.

The Tenwek medical team saw about 150-250 patients per day. We had prayer and devotions every day with the patients who came for care. Elias, one of the ophthalmic clinical officers, and I would screen vision, assess for cataracts, and distribute eye drops for glaucoma and allergies. All of the cataract surgery candidates were sent back to a building near our camp where the cataract surgeries would be performed. More than 40 people had their eyes operated on.

There were four elderly women who had never left their small fishing village. However, they had faith that our team of physicians could cure their blindness. One of the ladies did not have enough money to even be examined in the first place, but God provided for her through the generosity of another patient.

This experience has definitely confirmed my desire to work as a medical educator and ophthalmologist in a developing setting, likely at a mission hospital. In the meantime, I hope to return to Tenwek Hospital several times throughout my residency. The people of Kenya have left a lasting mark on my heart that I cannot ignore. Although many things about my future are still uncertain, God has a way of authoring my story infinitely better than I could imagine.