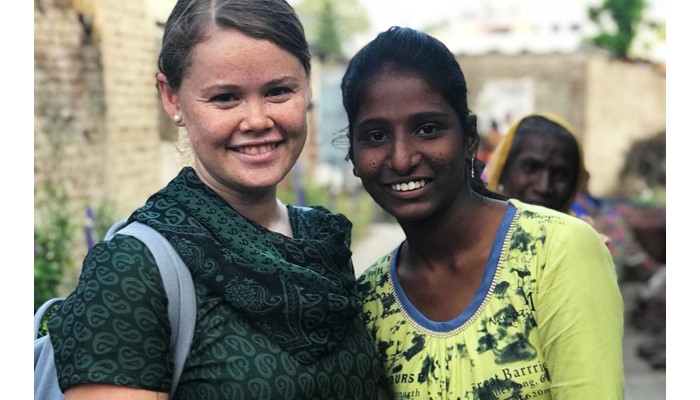 When one is on an outreach in Manila, Philippians, one of the world’s most populated cities, it is never hard to meet people. My team and I would step out of our accommodation, only to be instantly surrounded!

However, on this particular day, it wasn’t about the throngs surrounding us.

We were prayer walking, asking God who we should talk to. I felt to go to the local basketball court and sit with people there. As we approached, I was drawn to a woman who was visibly pregnant. Being a midwife, I was instantly interested! She and a group of friends were laughing and talking; we asked if we could join them. She welcomed us, and in typical Filipino fashion, offered us food and introduced us to her other children. She didn’t speak much English, but gestures and laughter cross all kinds of barriers! After a bit I started asking about her pregnancy. This woman, in her broken English, told us that she was 8 months pregnant, but she’d never gone to have a check-up because she didn’t have money. I offered to come by her house and do a check on her the next week, if she wanted? She excitedly said ‘yes, she would!’ and showed me her house. The next week I went and visited her. She made a space outside her front door for us to sit, and I gently palpated her belly. I brought a Doppler with me (a hand-held ultrasound that enables you to hear the baby’s heart). So, on the side of a busy road, outside her home, she got to hear her baby’s heart beat for the first time.

Since she lived so close to where we were staying, I saw her nearly every day and was able to do a few more checks on her. The baby was doing well! We talked about how to stay healthy during pregnancy, some of the danger signs to look out for and when to get medical help.Through these times, friendship developed. She began to share with me some of the difficulties she was facing personally. I prayed with her for the difficulties she and her husband were going through. We talked for hours about relationship with God and others. She started to grow in her relationship with God, and through that things began to change in her relationships within her family!

One day, about a week before we left, I went to visit her. When I didn’t find her home, I asked a neighbour where she was. The neighbour told me that she’d seen one of the danger signs I’d told her about – bleeding – and had gone to the hospital straight away. I found out what hospital she’d gone to, and went to visit her the next day. I was so grateful to find that both she and her baby boy were both safe and healthy!

When we left I didn’t know if I would ever see her again. Sometimes we meet people and they have a profound impact on us, but we won’t see them again in this life.

This wasn’t the case with my friend. I returned to Manila for another outreach 3 months later. This time I was in a different part of the city.

One day a team mate and I ventured across the city to find her. As I walked down the familiar streets I prayed that she would be home. As I rounded the corner I saw her neighbour. I waved and smiled! At that moment, she came out of her house! We both shouted and laughed and embraced each other. It was such a joy filled reunion!  I got to hold her son who was now almost 5 months old.

It was so good to reconnect with her, pray for her, and hear how she had been. She shared about how she and her husband were doing much better.

It can be hard to say goodbye after a short outreach. The relational person inside of me wants to stay with them forever! But I have grown to trust that God is at work in all our lives; the little conversations that we have with people can make a huge difference – even save lives! And the moments like this one become so special.

See which tags match your interests. Create an account today
Organizations related to this story: Youth With A Mission, Perth - Health Care Ministry
Favorite This Story